FACE YOUR FEARS ON #HALLOWEEN (Netherworld in #Atlanta)

Halloween was not the most celebrated holiday of the year, growing up in a religious household. However, before my mother gave her life to God, I do remember going trick or treating in the small town of Whiteville, TN. As a child, I loved it. Not only did you get a chance to enjoy picking out your costume, you could wear it to school! Then, to top it off, once you went from door to door that night, you had bags and bags full of candy! Wow, next to Christmas, this was my favorite holiday. (It’s sad that most kids don’t get a chance to experience that anymore.) I’m not dissin’ the fact that some people don’t celebrate this holiday, because even now as an adult I don’t buy candy for the kids in my neighborhood. (But I have a valid reason!) As well, others have a valid reason why they don’t allow their kids to “Trick or Treat” or participate in festivities surrounding Halloween. One very valid reason is that it’s not safe….(When I was growing up in my small town which only populated 3,000+ people by 2000, it was different! You knew most of the people in town because they either worked at the school, was related to you, taught one of your parents, had a child your age that you knew, …….I think you get it! We all were familiar with you because it was a small town!)

I said all this to say that since Halloween was not celebrated in my home as such, I had never gone to a haunted house, Halloween party, or anything of that nature, even when I became an adult. That is until this year! I’ve lived in Atlanta now for about almost 5 years and I had always seen and heard of this haunted house called Netherworld but I had never gone. Ironically my partner, who also grew up in a Christian home, had gone to a haunted house before, but never this one, so we decided to give it a shot. I must admit that I was a little afraid of what would happen or what I might see! However, unlike a particular friend of mine (who will remain nameless) I went on anyway!

Once we finally made it up the extremely long line out front and entered the house, we walked into a room that was spinning which made me think that maybe this experience would be more like a fun house instead of a haunted house but as soon as I exited this room, I saw a large “warrior looking” man charging straight at us!

My partner is a very mature person, but he loves to enjoy life, he loves to travel and loves to have fun when he is not working. I totally understand…he works hard, so he believes in playing even harder! For fun, we sometimes race our remote control cars in the park! Sometimes on Saturday, I’ve even been awaken by him bouncing on the bed saying “Wake Up”. (How cute huh? ….Not when you are really tired from working all week and have been waiting for Saturday so you can lay around! LOL )

What I want you to understand from the story above is that when he is playing, he is hyper as HELL!

BACK TO THE STORY 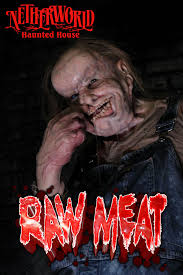 So….we enter the haunted house, with me in front and him walking behind me….when we see the big guy coming towards us, he yells “Oh hell….RUN!” Since, I had never been to a haunted house before, that’s exactly what I did…. I started running towards the exit sign that I saw, thinking it was supposed to guide you through the house. Us running is not the funny part….the funny part is that, the man charging toward us started saying “No come back” and my partner was like “No!”. Then, the man was like “No really, come back, you are going the wrong way!”……LOL….. He had to come out of character in order to get us to get back on track…. From then on I knew I was going to let my partner lead out because he was making me too damn jumpy!

As we continued through the house there were many more rooms to see and many more scares! Some weren’t so bad since I tried to stay a distance behind, so they would scare him instead of me! Although, they did get me quite often! It would be completely impossible for me to walk you through the rest of the house because it was sooooo much. But I do want to say this, if you ever get a chance to see one, you will love it!

That’s not the end…..since we went on a Sunday night but bought tickets for two different shows at Netherworld, we decided to do one show on Sunday and come back for the second one, which means that tonight I have more in store!

They only do the shows near Halloween time but if you’ve never gone and you live in Atlanta, you should definitely check it out!

Wish me luck tonight! Hopefully I can keep my composure tonight!